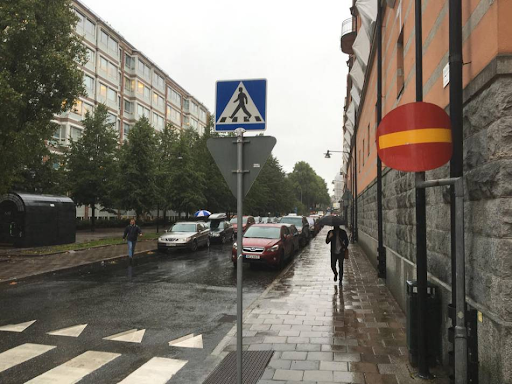 The Swedish town of Växjö is located in the southern region of Småland and has some 66,000 inhabitants. In this article from the conservative Swedish site, Nya Tider, the town's mosque and imam, Ismail Abu Helal, are featured. The imam has been a leading voice in pushing for more official recognition from Sweden's political leaders for the Muslim community and its holidays. Apparently, the imam is not as interested in recognizing Christian holidays. The below article, which features a brief exchange between the imam and Nya Tider, is translated by Fouseqquawk.

Caption:  Imam Ismail Abu Helal in  Växjö wants Sweden's politicians to recognize the Muslim holiday of Ramadan, but he himself does not comprehend when Nya Tider asks him if his Islamic association will recognize a Christian day.

Demands that Sweden celebrate Ramadan- refuses himself to care about Christian holidays: "Why should we? We are Muslims".

Växjö's Muslims continue to make demands. That they recently got permission to have calls to prayer gave Imam Ismail Abu Helal a bleeding tooth, and in a submission in Smålands-Posten, he demands that the Swedish prime minister begin to recognize Ramadan. He himself doesn't understand when Nya Tider asks if his congregation will recognize Christian holidays. "Why should we? We are Muslims," he says to Nya Tider. The anger is now increasing, even among liberal politicians, that "inter-religious respect" seems to be one-way.

New demands with "integration" and "religious freedom" as arguments

When Växjö's Muslim congregation was formed, the imam explained that it was important for integration that Sweden must allow that the country be called a democracy with religious freedom.

The same arguments-integration, democracy, and religious freedom- were also sticking points when the Muslim congregation demanded a few years later to be able to build a mosque. In Dagens Nyheter on 2 November 2003, Ismail Abu Helal argued, among other things, that the mosque was important for integration since it would "bring all nationalities together".

The wooden building in Araby is only temporary. It was there they applied to be able to declare by loudspeaker every week that Islam is taking over the area. Ismail  Abu Helal repeated on Swedish State TV on 12 February 2018  the well-known argument- "I think it is good for integration. It will be a confirmation of religious freedom, " he said then.

Over time, the Muslim congregation also created its own Muslim school. Not unexpectedly with the same argument. Ismail Abu Helal wrote to Swedish State TV on 7 April 2017 that the consecrated Islamic school had an "important role to fill for integration."

With the mosque, call to prayer, and Muslim school in place, the imam is taking another step to create "integration" in that Sweden will show that democracy and religious freedom rule. This time, it is synonymous with Sweden becoming more Islamic.

In a debate article in Smålands Posten on 21 May, a week after the call to prayer received permission, he complained that Sweden did not recognize Ramadan more.

Swedish prime ministers should give Muslims good wishes before fasting, Ismail Abu Helal believes. That would be "good for integration" and something Sweden should do if it "claims to be a tolerant society that accepts differences." The imam would like to see politicians begin to use the Arabic phrase, "Salaam Alaykum", which means, "Peace be with you" before every Ramadan  and then "speak briefly a little on why people fast."

Even though Växjö's Muslims constantly refer back to consensus, democracy, integration, and freedom of religion when the congregation demands that Sweden come closer to Islam, they do not want to see any exchange in the other direction.

When Nya Tider asks Ismail Abu Helal if he himself is thinking of beginning to recognize and teach Christian holidays, he becomes confused and cannot understand the question.

NyT : I was thinking about hearing if the Växjö mosque will recognize Christian Transfiguration Day, which is (coming) soon?

NyT: It is an important day for Christians to honor when Jesus and His Disciples gathered on the Mount of Transfiguration, where it was declared that Jesus is the Son of God. Will you recognize that in some way?

-I don't understand the question. Why would we do that? We are Muslims.

NyT: Since you yourself recently wrote that Swedish leaders should recognize Islamic holidays, I was thinking that you, as a Muslim leader, will begin to recognize Christians?

-I wrote that this is a wish that prime ministers wish Muslims good luck on Ramadan. Many Muslims would be happy, and this has been successful for integration, for example, in Canada.

NyT: Another thing that has been successful is to take the custom where you go, but this is nothing for you?

-Certainly. I can eat herring. But I cannot change my religion.