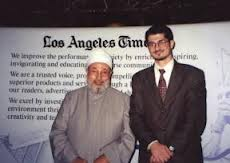 Hussam Ayloush is the Southern California director of CAIR. For several years he has occupied that position, and for several years, he has been accused of making anti-Jewish utterances. In this letter directed to California Governor Gavin Newsom, the organization, Jews Indigenous to the Middle East and North Africa, (JIMENA) expresses its displeasure over the history of anti-Semitic statements made by Ayloush, who is also a California Democrat Party delegate.

I might add that I have seen and heard Ayloush speak on several occasions over the years, and I have heard him make what I consider to be anti-Semitic statements. In saying this, I am not talking behind his back because I have confronted him personally with those statements, and I have called him an anti-Semite to his face. Of course, I would expect nothing else from a representative of CAIR, a despicable organization with a  long history of support for Middle East terrorism.